Be a beginner | Cherylanne Skolnicki

Being a beginner is humbling. It’s uncomfortable. Awkward. Humiliating even. Especially when my beginner-ness is being flaunted in public. I avoid it like the plague. Always have.

Listen, there are plenty of things I’m not good at, but they are generally things I can just avoid. For example, I’m not good at drawing, singing, or hair braiding. I’m terrible at volleyball, softball, basketball (okay, let’s just say anything that ends with the word “ball”). I cannot find my way out of my neighborhood without a GPS and I absolutely cannot work the remote controls in our house. You get the idea.

I’m much more comfortable being capable. I like to do the things I’m good at. Don’t we all?

Sometimes though, my incompetence tiptoes up behind me and taps me on the shoulder. Like today. This morning, I took a yoga class in which I was by far the least capable person in the room. And it was torture.

My body fought with itself as I struggled to balance, or to find a pose at all, much less the strength to hold it. The fighting wasn’t helping. And yes, I know. You’re not supposed to fight with or judge yourself in yoga – it’s supposed to be “your practice”. Well, my self was not having it today. My weakness was showing with every vinyasa and I was not happy about it.

And then as I fell out of crow pose for about the 10th time in a row, the first flash of insight came. 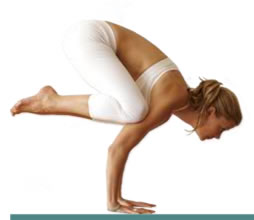 I’m not actually supposed to be good at this. I’m a beginner. Sigh.

I don’t want to be a beginner. I want the Disney FASTPASS to competence…to excellence even. I want to be able to move like my teacher today who basically floats through the air. It’s breathtaking. I want that.

Being competent is easy. There’s no need for vulnerability, or practice, or effort. You just sail along – easy, breezy, beautiful.

But as I was standing there yearning for competence, I had my second flash of insight.

I thought about my kids climbing a rock wall on vacation last week. My oldest daughter was determined to reach the top, ambitiously beginning her ascent, reveling in her early steps, tearfully frustrated when she was thwarted by a slippery rock, panicked as she descended against her will, tangled up in the conflict between her desire and her skill.

In contrast, my youngest was unabashedly gleeful. She was enthralled with the harness, delighted by the view, posing for pictures, joyful each time her hand or foot reached a rock. When she lost her footing and descended,  she cheerfully began to climb again to see if she could get higher the next time.

(My son fell somewhere in between, more ambitious than my youngest, less frustrated than my oldest.)

Little children get it. They have to. They’re beginners at everything. They are learning to walk, to talk, to write, to spell, to add, to read, to reason. They are learning to button buttons and zip zippers, to find matching outfits and to keep rooms clean. They are learning to ride bikes and to climb trees and to turn cartwheels. Beginners. All the time. Every time they master one thing we introduce them to another hurdle. And they willingly accept these challenges because they know something we’ve forgotten. 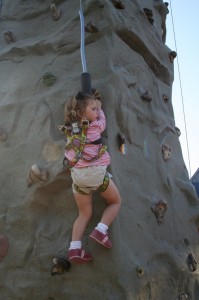 Being a beginner is humbling. It’s uncomfortable. Awkward.

Every fragile success is a cause for celebration…and there are many of them, stacked on top of one another like successful steps up a rock wall. Being a beginner makes us feel alive.

I kept holding the image of my children on that rock wall as I moved through the poses, sometimes succeeding and sometimes not, but with an updated view of practice as play. That simple shift transformed my experience. I needed to remember what I’d forgotten.

Whether it’s a yoga class or a 5K, a guitar lesson or an art class, will you let yourself be a beginner again? Be valiant. Be brave. Trade in your comfort for exhilaration. Let yourself play.